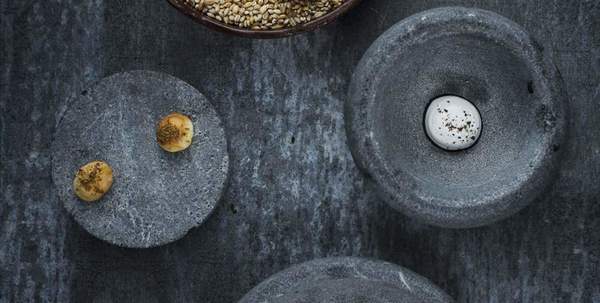 Renegade stunts in a tried-and-true setting

A small, grey dwelling with a grey door, windows carefully covered, in a back alley of central Trondheim. Sounds like the set-up for a horror story, but of course it’s not. Previously, the premises housed Credo, today they are home to Fagn.  Same unassuming building, same amount of culinary anticipation when setting foot inside.

Fagn (Norwegian for embracing and receiving with joy) is where young Chef Jonas Nåvik shows off the skills he picked up at Alinea in Chicago and Mathias Dahlgren in Stockholm, as well as Engø Gård and indeed the old Credo. He is seconded in the kitchen by Kim Remi Moen and Bendik Fladvad Størdal.

First a walk through the bar and bistro, down a flight of stairs to the dining area where, in seconds, guests are rewarded with rosé champagne, a cold towel on a warm day, and––boom––a spectacle of beautiful snacks, starting with a humble, zestful and crunchy white radish from a local biodynamic farm, followed by a small tart of grilled oyster and fennel and another one of raw shrimp, fried stockfish and dill; brilliantly executed with great textures and powerful flavors. Artful plating turns playful when a long, crooked twig arrives with a seriously juicy piece of langoustine chased by several other tasty bites. Then, a thoughtful bread service and a deep breath.

Diners are doted on by attentive, amicable staff, this is a relaxed fine dining operation. There’s genuine warmth, laughter and joy within these walls where the no fuss-comfy, yet smart décor aptly illustrates the meaning of the word fagn. Generous spills of wine help, of course, as does the fact that the pairings are well calibrated.

Flavors and textures are skillfully defined and sometimes appear in a rather renegade manner. Crunchy, white asparagus spears are topped with a sauce of fermented asparagus that wondrously and momentarily sets in custard-like manner. Arctic char is cooked tableside on a hot stone under burning straw. Thin ribbons of potato mimic tagliatelle, they’re dressed with mushroom purée and a fermented leek sauce.  A smashing piece of monkfish, grilled on the bone, is served with an umami-packed bouillon of langoustine heads and a purée of roasted Jerusalem artichokes. Powerful California pinot is poured and Laguiole knives appear with promises of carnivorous pleasures; Swedish highland breed beef delivers magnificently, along with local morels filled with onion cream and a single spectacular Norwegian green asparagus dressed with pickled onion, mustard seeds and herbs. A 20 year-old trick is pulled off winningly when liquid nitrogen is poured over local strawberries and fresh cheese, it’s followed by two lovely desserts, one acidic and fresh with rhubarb and long pepper, the other salty and toasty with tonka beans, oats and brown butter.

Restaurant Fagn focuses on local, organic and ethical produce, remaining a peripheral, non-dogmatic participant on the new-Nordic scene. It’s a good place for Nåvik & Co. to be in. Just like it is for the diners who, after a total of twenty-something courses, leave with a parting gift of bread and butter for breakfast.