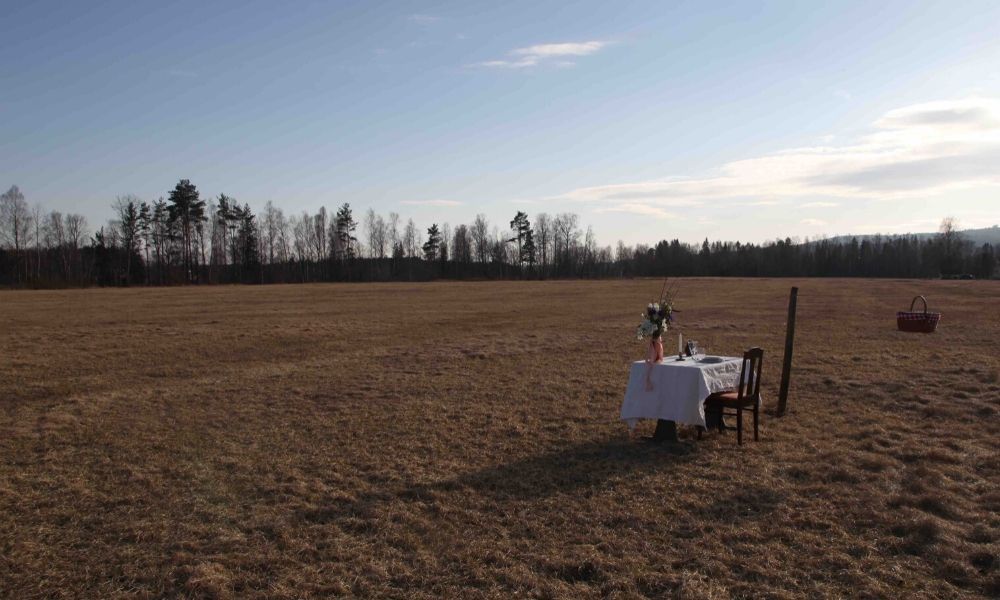 THE LONG READ: No one knows if eating out will ever be the same again. But we do know that the restaurant community, while trying to stay afloat during this crisis, is doing everything in its power to find new, creative ways of offering delicious food and supporting organizations and individuals in need. This resilience bodes well for the future.

If you order from the delivery menu at Bistroteque in East London’s Bethnal Green, you may get lucky. Your potato & Comté pie, roast chicken or pancakes with berries and clotted cream will likely be delivered by the restaurant’s long-time collaborator, Greek-born drag queen, A Man to Pet. The popular performer used to sprinkle sass in Bistroteque’s cabaret space but has now taken on the role as the restaurant’s delivery service representative, bringing your meal to your door on a bicycle, and possibly, with a side of surprises.
The pandemic has troubled the restaurant industry in numerous ways, yet it has also sparked creativity and imagination. There are a huge number of initiatives aimed at staying in business during the lockdown and supporting those in need.
Some actions are straightforward, but still ingenious and smart. The Momofuku Group has set up a nonprofit organization, The Momofuku Bluetape Fund, to raise money for their employees worldwide. A brief online auction offered signed cookbooks, Noodle Bar Skip-the-line cards, sourdough classes at Ko, and at-home dinners cooked by Dave Chang himself. One of the highest grossing items was a private party for 12 at Ko Bar.

Chef-prepared dishes at your corner shop
Putting idle chefs to work and making use of stalled kitchens by adapting and reinventing signature dishes for take-out orders is by now de rigueur, some restaurants however, are involving others in the process. In Stockholm, Chef Niklas Ekstedt got a head start back in March when he began selling his famous game meatballs and a few other choice dishes at a reduced price in the 7-Eleven store next door.
This inspired K-märkt, a considerably larger restaurant in the same general neighborhood, to sell their Pasta Ragu Bolognese at three centrally located 7-Eleven stores.
“Next week we’ll add another dish, meatballs with cream sauce, lingonberries, pickled cucumber and mashed potatoes. The food is chef-prepared and should be consumed within two days. A completely new level in 7-Eleven’s assortment, ” says Jens Dolk, co-owner of K-märkt.
In New Orleans, one of the American cities most affected by the corona virus, local supermarkets Rouses Markets are selling dishes from several of the city’s well-known restaurateurs and giving all proceeds straight back to the restaurants. Chef Alon Shaya of Israeli eatery Saba is delivering hummus with pita bread while Chef Tory McPhail of Commander’s Palace is supplying a local classic and the restaurant’s long-time signature dish, turtle soup. Rouses Markets is planning to expand the selection to include dishes from other establishments and bakeries around the city.
The power of social media channels is used in a variety of ways. This is particularly effective when well-known profiles, influencers or organizations use their huge followership to highlight important causes.
Back in mid-March, Danish Madfeed launched its ambitious Daily Dispatch series on  Instagram, introducing important initiatives to its 108 000 followers.
”By presenting good examples and highlighting what others have done already, we can help those of you who are still at a loss with a bit of inspiration, and we can make it easier for those out there looking for great food and community to find the places that are adapting their service and are still open for business,” as per Madfeed’s Instagram feed.
Instead of personally creating content, Copenhagen’s beacon of sustainable gastronomy, Amass, has handed over its Instagram account to friends and colleagues, giving lesser-known businesses access to Amass’ sizeable audience of more than 85 000 followers. The initiative, Friends of Amass, is presented as follows: “Instead of serving you a series of throwbacks from the past (almost) seven years of Amass, we thought we would use it to highlight friends in our industry who are adapting to these horrible circumstances in real time, making sure you can still enjoy the work of this amazing community.”

In support of local food sources
Restaurant suppliers – farmers, foragers, bakers, cottage industries, and producers of local tipples – are many times hit just as hard as the restaurants themselves. A great number of initiatives are aimed at helping these stay afloat through donations, auctions and collaborative efforts.
At the onset of the pandemic, Mia Jonsson, owner of Lilla Labäck vegetable farm in central Sweden, saw most of her large restaurant buyers dramatically cut their orders. Naturally she worried, having just invested in rare and exclusive seeds, she had no idea how she would survive the season. Some of her loyal customers, however, really stepped in to help, among them Savant, a sliver of a wine bar in Stockholm that started selling bags of Lilla Labäck’s produce. It was a lifesaver. And even though Savant might be tiny, serving only a finite number of lunches and dinners, it is a popular spot, so much so that it has enticed regulars and casual guests alike to buy Jonsson’s vegetables. Bringing home this organic bounty, directly from one of the country’s most talked about farmers, has really caught on.
On an entirely different scale, the world’s largest food distributor, US-based Sysco, supplier of food, smallwares, kitchen equipment and tabletop items to 600 000 restaurants and other businesses, now offers advice and support to restaurants wishing to explore the grocery business. Their corner store concept – Sysco Pop Up Shop – is not meant to replace incomes from restaurants’ regular activities, rather it seeks to help restaurateurs set up grocery stores within their spaces as a way to stay open during the lockdown. The idea is also designed to provide restaurant customers with an opportunity to purchase kitchen staples such as eggs, condiments, bread, toilet paper, and paper towels without having to visit crowed supermarkets or wait for home deliveries.

Professionals with a higher purpose
Yet other initiatives are reaching out to organizations beyond the immediate restaurant- and food communities. In Italy, a group of bartenders is raising money for a woman’s domestic violence shelter, an enterprise instituted by Giuseppe Capotosto, bartender and head of the Coctails Dreams Bartending School, outside Rome. Capotosto offered a series of live, online bartending classes from April 5-15; Viaggio nel Mondo dei Distillati featured bartenders from all over Italy who presented themed webinars like “Il Vermouth di Torino”, by bartender Fulvio Piccinino, author of the book Futurist Mixology, “No Waste, L’Ecosostenibilità in bottiglia” by award-winning bartender Ilaria Bello, and “Gin – Ieri, Oggi e Domani” by Capotosto himself. All donations went to Centro Antiviolenza Nadyr, a volunteer-run center for victims of domestic abuse in Lazio. The group will continue to raise funds for this center.
Further north, in Copenhagen, restaurant Alchemist’s project JunkFood was launched in 2018 to give the city’s homeless warm and nutritious meals, round-the-clock. Due to the pandemic and the restaurant regulations that came with it, Chef Rasmus Munk decided to use his empty kitchen to increase JunkFood’s production. As only five to six chefs are allowed work simultaneously, the daily number of meals they cook is limited to about 550, a fact that compelled Munk to encourage other restaurants with similarly empty kitchens to join the cause. These days, the project is co-managed by the city’s shelters and hotels, and by Copenhagen’s Mayor of Social Services, Mia Nyegaard.
Back in Stockholm, Restauranglabbet and Paul Taylor Lanthandel are both putting their staff to work, cooking food for hard-working medical staff and people in risk groups. Under the banner Call for Action, Restauranglabbet is primarily using products that would otherwise pile up and go to waste at wholesalers who, due to diminished demand, cannot unload them.
To reach a greater number of possible donors and increase the number of meals delivered to health care workers, Paul Taylor Lanthandel is collaborating with one of Sweden’s largest food websites, köket.se.
If anything good comes of this pandemic, it could be a heightened sense of creativity; the ability to roll with the punches, to find new and unorthodox ways of pursuing commerce. Maybe some of the ideas launched during the corona crisis will be part of the future of the restaurant industry.

Corona-safe in the meadow
In the Swedish village of Ransäter, population 121, Linda Karlsson and Rasmus Persson have created their own notion of what a post-covid-19 restaurant might look like, Bord för En, or Table for One. The single seat is available for online reservations and the solo diner is given directions from the nearest train station to the table, set in a meadow, far from any social interaction. There is no waiter, instead the meal’s three courses and accompanying drinks are transported to the table via a basket with a pulley, strung from the couple’s kitchen window.
Rasmus Persson, a chef-trained radio host, offers a set menu; Swedish-style hash brown, or råraka, served with smetana, seaweed caviar and sorrel; yellow carrot and ginger purée with browned hazelnut butter and sweet corn croquettes; gin-kissed blueberries with iced buttermilk and violet-infused sugar from local sugar beets. The beverage pairings are curated by another Värmland-born profile, Joel Söderbäck, responsible for several award-winning cocktail bars in Stockholm.
“A lot of people’s lives have changed completely because of covid-19 … and we want everyone to have the chance to enjoy a culinary experience, therefore, you decide yourself what you can pay for the three-course dinner. We have already gotten reservations and are looking forward to welcoming guests starting in May,” explains Linda Karlsson.